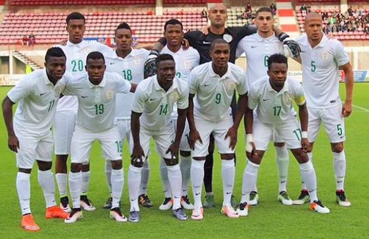 With barely a month to the 2018 FIFA World Cup, countries have started releasing provisional squads for the mundial. A few exceptions have released the final 23-man squad for the quadrennial event.

Super Eagles Coach, Gernot Rohr on Monday made public a list of 30 players out of which seven would eventually be axed. Notable newcomers were Simmy Nwankwo of Serie A side Crotone.

The 26- year old had banged in six goals in his last seven appearances for the modest Italian side. A form that blossomed late in the season to get a look in by the technical crew.

Another surprise inclusion is the Europe-bound Nigeria league hotshot Junior Lokosa of Kano Pillars. Lokosa leads Nigeria’s league with 18 goals (as at the time of writing this piece) and is being touted to be on his way to Europe.

However, the notable omission of Brown Ideye and Efe Ambrose is generating debate. On current form, does Ambrose deserve a place in the team? Why was Ideye dropped again as it happened four years ago? As for his poor form in front of goal, we hardly have a prolific striker at the moment. But we all know that Ideye’s swashbuckling style allows other forward to score goals. He did for Emenike in 2013 AFCON and assisted Kelechi Iheancho against Zambia in the qualifiers before he lost his place.

Efe Ambrose was a regular for Hibernian in the Scottish League the season just ended and I think he deserves a look in, a sentiment shared by former player and Coach Samson Siasia.

However, the players invited are a fair representation of the best Nigeria can produce at the moment. Most of them prosecuted the qualifiers and are known to Rohr since he took over the team.

The German has brought some stability to the team and needs to add some steel and full concentration for 90 minutes or 120 minutes if the need arises. We saw the Eagles concede late goals against Zambia, Cameroun and Algeria in the qualifier due to avoidable errors and could be costly at the bigger stage.

As for the goalkeepers, Rohr seems to settle for the rookie goalkeeper, Francis Uzoho of Spanish side Deportivo La Coruna barring any injury. Ikechukwu Ezenwa is okay but his lack of exposure and limited height could be his undoing while Daniel Akpeyi has failed to inspire confidence whenever he was called upon.

For the defence, it’s almost certain that the “Oyibo Wall” central defensive pairing of Leon Balogun and Williams Troost- Ekong will be first choice, while Abdulahi Shehu mans the right back with Brian Idowu laying claim to the left. Elderson Echiejile would likely deputise for his declining productivity and age.

The most problematic area is the midfield. That area determines the pace of the team. The coach should be able to identify the right combination of players and tactics. We have in that area the likes of John Mikel Obi, John Ogu, Mikel Agu, Oghenekaro Etebo and Wilfred Ndidi. As for the attack, Moses Simon, Victor Moses, Kelechi Iheanacho, Alex Iwobi, Ahmed Musa, Odion Ighalo and Junior Lokosa.

Honorable mention. I would have loved to see Azubuike Okechukwu, who captained the 2016 Olympic Team before Mikel took over in the finals. A Turkey based midfielder who makes passing looks easy. I don’t understand yet why the former Bayelsa United captain never received an Eagles call up.

Vs DR Congo Port Harcourt May 28

Alpha Femme You Is Hiring