Enyimba Football Club failed to register successive wins at the Nigeria Professional Football League playoff after falling to a 0-2 loss to Kano Pillars in the matchday two fixture concluded at the Agege Stadium this morning.

Adamu Hassan and Nyima Nwagwa scored late to give Pillars the edge in the game played over two days as heavy downpour, resulting in poor visibility and flooding, disrupted play on Thursday evening with only added time left in the first half.

An intense start to the game saw chances created at both ends inside the opening quarter hour, with Thomas Zenke and Alassan Ibrahim going into the book for an off the ball altercation.

Yet, the highest point of the half came at it’s end when Ibrahim Mustapha fumbled the ball to the goalkeeper despite having an empty goal to deal with. It turned to be the last notable event of the night as the players returned to their dressing rooms following the deluge, and play was suspended after.

Upon resumption on Thursday morning, Pillars dominated the early exchanges of the second half but Usman Abd’Allah brought in Bashir Abdulrahaman for Ikechukwu Ibenegbu and the change proved meaningful as the forward was brought down in the box shortly after for penalty.

Enyimba however failed to take the advantage from twelve yards with Suraj Ayeleso diving right to save Ifeanyi Anaemena’s weak strike.

Enyimba waxed stronger and created chances, with Abdulrahaman coming face to face with the goalkeeper and Joseph Osadiaye having his effort roll across the face of goal.

There was a turn around, however, when Adamu Hassan headed Pillars in front with fifteen minutes left following a cross from the right.

Nyima Nwagwa doubled the lead five minutes later in a similar fashion, heading in Chris Madaki’s cross to put the match beyond the People’s Elephant. 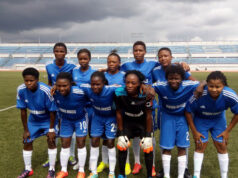