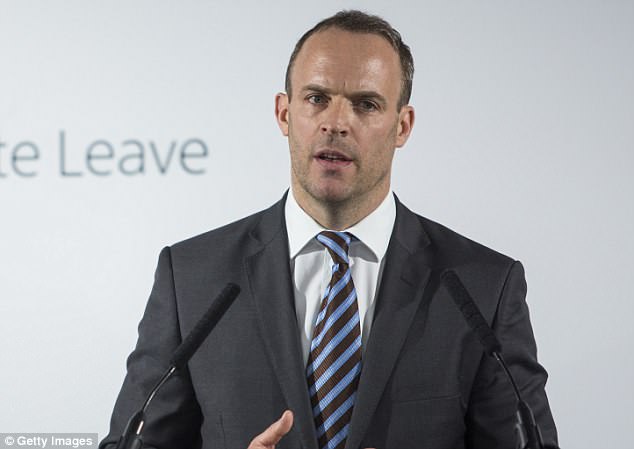 A deal with the EU can be reached by October but the UK is preparing for the possibility of no deal, the new Brexit secretary Dominic Raab has said.

He said he would return to Brussels for talks on Thursday and strain “every sinew” to get “the best deal”.

But a responsible government puts plans in place in case talks do not end well, he told the BBC.

Labour leader Jeremy Corbyn said there must be a “serious stepping up of negotiations” to avoid no deal.

Mr Raab told the BBC’s Andrew Marr Show if the “energy, ambition and pragmatism” the UK brought to negotiations was reciprocated, a deal would be done in October. He noted that 80% of the withdrawal agreement was already settled.

And he said it was “useful” that EU chief Brexit negotiator Michel Barnier had raised questions about the prime minister’s blueprint for the UK’s future trading relationship with the EU.

“Actually the fact Michel Barnier is not blowing it out of the water but asking questions is a good, positive sign – that’s what we negotiate on.”

But he said preparations such as hiring extra border staff were being made because “any responsible government” would make sure plans were in place in case negotiations failed.

Technical notices would be released for businesses and citizens affected during the summer to be “very clear about what they should do and what we are doing on their behalf” he added.

Asked about European Commission comments that there were no arrangements in place for UK and EU expats in the event of no deal, Mr Raab said: “Well, I think that’s a rather irresponsible thing to be coming from the other side.

“We ought to be trying to reassure citizens on the continent and also here. There is obviously an attempt to try and ramp-up the pressure.”

He added that the prospect of people being removed from the UK was “far-fetched and fanciful” and said it would be “frankly irrational” for the EU to go for the “worst case scenario” of no deal.

But the UK had to be prepared “whether it’s the allocation of money, preparation of our treaty relations, we are hiring extra border staff and I think people need to know that we ready so that Britain can thrive, whatever happens,” he said.

Labour leader Mr Corbyn, on a visit to the annual Tolpuddle Martyrs Festival in Dorset, said it seemed the priority was preparation for no deal.

He added: “No deal would be a very bad deal because we then go onto World Trade Organization tariff rates that would hit the manufacturing industry and hit the food processing industry, and hit an awful lot of things in Britain very rapidly.

“There has to be a serious stepping-up of negotiations to reach an agreement on customs and on trade.”

The UK is due to leave the European Union on 29 March 2019, but the two sides have yet to agree how trade will work between the UK and the EU afterwards.

Theresa May hopes the government’s plan, detailed in the Brexit White Paper, will allow the two sides to reach a deal on relations by the autumn.

Earlier Mr Raab suggested to the Sunday Telegraph that he was still persuading other cabinet ministers that the government’s “pragmatic” strategy for leaving the EU was the “best plan” and that the UK could refuse to pay its so-called divorce bill, a payment from the UK to the EU estimated to be about £39bn, if it does not get a trade deal.

The White Paper proposes close ties in some areas, such as the trade in goods, but will end free movement and the jurisdiction of the European Court, and allow the UK to strike trade deals with other nations.

Critics at Westminster say it is an unworkable compromise which would leave the UK being governed by the EU in many areas, but with no say in its rules.

And EU chief negotiator Michel Barnier questioned on Friday whether UK plans for a common rulebook for goods and agri-foods were practical and said the EU would not run the risk of weakening its single market.

Meanwhile, Mr Davis, whose resignation from Mrs May’s top team was followed by that of former Foreign Secretary Boris Johnson, told the Sunday Express the government should “start again” on withdrawal plans.

Man commits suicide over inability to get married at 40