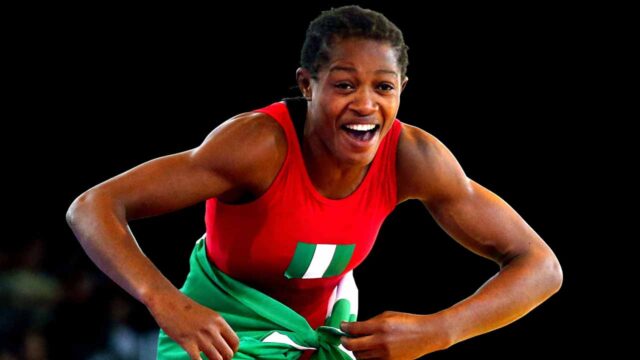 Odunayo Adekuoroye retained her Commonwealth crown, even as Blessing Oborududu won her first-ever gold medal in the Games history on Day 2 of the wrestling event in Gold Coast, Australia.

In a keenly contested finale, World silver-medalist, Adekuoroye battled to gold in the 57kg weight class with a 7-5 points win over favourite Pooja Dhanda of India, who beat her in Season 3 of the Indian Pro Wrestling League earlier this year.

With the win, the 24-year-old thus claimed back-to-back gold medals at the Games, following her success in Glasgow, four years ago.

Meanwhile, 8-time African champion, Oborududu, came from behind to defeat Canada’s Danielle Lappage 4-3 and claim the gold medal at stake in the 68kg weight category.

On her way to the final, the 29-year old Niger Delta University undergraduate had brushed aside Lilian Ntigha (Kenya), Sherin Sultana (Bangladesh) and  Divya Kakran.

In the men’s event, Amas Daniel failed in his attempt to land a first Commonwealth Games gold as he was stopped by India’s Bajrang.

But after negotiating his way in the repechage, the 6-time African champion will eventually settle for a bronze medal, beating Canada’s Vincent de Marinis 4-4 (by criteria) in the 65kg weight class.

In the men’s 97kg class, Soso Tamarau narrowly missed out of the bronze medal, losing 2-1 to Alexios Kaouslidis of Cyprus.

After Day 2 of the wrestling event, Team Nigeria have won 6 medals (2 gold, 1 silver and 2 bronze).

The wrestling event will be wrapped up on Saturday, 14 April, with reigning Commonwealth gold-medalist Aminat Adeniyi (62kg) and 2-time African champion Mercy Genesis (50kg) expected on the mat, while Melvin Bibo (86kg) and 2010 champion Sinivie Boltic (125kg) will also be in action as Team Nigeria continues its quest for more medals in the sport.

Khloe Kardashian Reveals How She Found Self-Love and Acceptance

NYSC gets a new DG