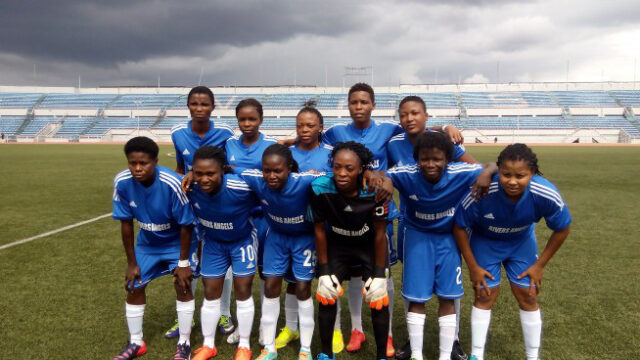 Alice Ogebe’s brace and a Cecilia Nku free-kick ensured Nigeria Women Football League (NWFL) side Rivers Angels climbed to the top of Group A with a 3-1 win over Delta Queens on Wednesday at the Yakubu Gowon Stadium in Port Harcourt.

Nku opened scoring in the 8th minute through a well taken free kick as she curled it beyond goalkeeper Onuegbu Ihuoma.

And in the 24th minute, Ogebe sent home a brilliant shot from 30 yards from a one-two play with Ikechukwu Vivian to double the lead for the Jewel of Rivers.

In the 30th minute, Delta Queens pulled one back in a controversial way as Ekong Rose headed home from an offside position which was flagged by the assistant referee but the center referee went on to award it.

That, however, did not stop Rivers Angels from pushing forward for more goals as Ogebe sealed things up with her brace from 25 yards to move the Edwin Okon led side to the top of Group A.

Okon after the game said he was happy the team got back to the top which was where they belong but thinks they are yet to hit top form.

“I am quite happy with the win and our position at the moment which is actually where we’re supposed to be,” Okon began.

“But we won’t let it get to us as there are still five more games to go.

“They are still work in progress and I pray we hold on to the position we’re in now till the end of the season to qualify for the Super 4,” he added

With the win, the Jewel of Rivers are top of Group A with 18 points and will next be on the road against Sure Babes of Ilorin next week.