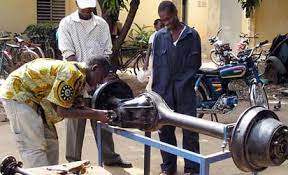 Surv. Ajie Emmanuel Ukaeme, said this when the National Union of Ekpeye Students of the institution gave him an Award of Excellence for his contributions to Education Development in the state.

He said technical education will revive the industrial revolution in Nigeria.

The Head of Department, Surveying and Geo-Informatics, Captain Elechi Amadi Polytechnic, Rumuola also said that the institution is the foremost technical college in the state and will continue to train graduates that will make an impact in Nigeria and around the world.

While commending the Rector of Captain Elechi Amadi Polytechnic, Rumuola, Dr. Samuel Kalagbor for his visionary leadership also said the institution is open for partnership with the Private Sector.

Surv. Ajie Emmanuel said such partnerships will lead to technological development in the country.

”As a polytechnic, practical is the watchword. By the time a student graduate from the department, he should be ready to face the world in terms of practicals. Normally practicals are predominant in polytechnics, we have a lot of equipment in the department and we tend to pursue practical exercises seriously. We’ve been doing it and we’ll continue on it. The equipment we have is for the use of the students and we want them to be using the equipment so that at the end of the day as they graduate they can be able to stand anywhere to perform practical exercises” he said.

Ajie Emmanuel also advised students to use their skills to create businesses that will create employment opportunities for the teeming youths in the country.

He said certificates alone cannot guarantee employment for the teeming youths in the country.

The Head of Department, Surveying and Geo-Informatics, Captain Elechi Amadi Polytechnic, Rumuola, Port Harcourt noted that many talented youths in the country are now celebrities by developing their skills.

Speaking earlier, the President of the National Union of Ekpeye Students, Captain Elechi Amadi, Polytechnic, Rumuola, Port Harcourt, Michael Friday said the reason for presenting the award to the lecturer was due to his contributions to educational development in Ekpeyeland.

He said the students have benefitted immensely from his support and advice while in school.

Michael Friday also asked students to focus on their studies and appealed to them to shun cultism and social vices.