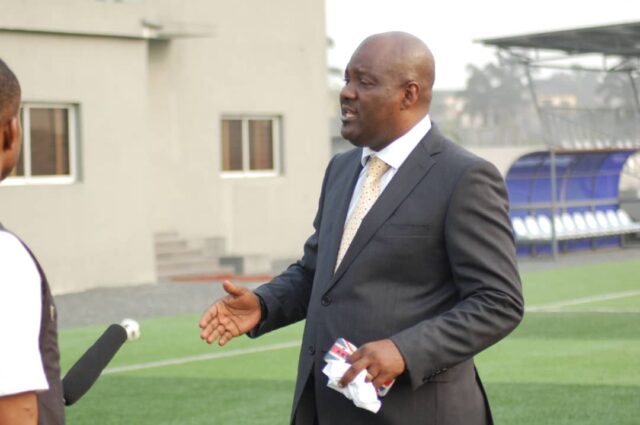 The Rivers State chapter of the Sports Writers Association of Nigeria SWAN has hailed the appointment of accomplished sports administrator Christopher Green Esq. as the new Commissioner for Sports in the state.

Christopher Green and four others were sworn in as Commissioners by Rivers state governor Nyesom Wike, CON, POS Africa, with the former Executive board member of the Nigeria Football Federation (NFF) assigned to take charge of the Sports Ministry.

Green’s appointment comes barely two weeks after the state-owned club Rivers United, under his saddle, confirmed their status as champions of Nigeria’s elite league division, a feat achieved in a record-breaking fashion.

The Chairman of SWAN in Rivers State Sarah David said the appointment of Christopher Green did not come as a surprise due to his great achievement at Rivers United.

“The appointment of Chris Green as the new Commissioner for Sports in Rivers State is not totally unexpected because it has now gone beyond any reasonable doubt that he possesses the Midas touch to make things happen in Sports administration,”.

“This is a testament to the popular saying that the reward for hard work is more work. Green’s reputation goes before him everywhere he goes and the conquest of the NPFL by Rivers United shows that he has not lost a single bit of his magic wand.

“SWAN Rivers as an association is delighted with this development and we believe that Green will bring his technical nous into good use while in charge of the Ministry because there are a lot of grounds to cover within the next year.

“We will also do our best as members of the Fourth Estate of the realm to work harmoniously with him to make his time as the Commissioner as successful as it can be for the state,” Ms. David added.

Most imperative on Green’s desk as the Ministry’s helmsman is the 2022 National Sports Festival to be hosted by Delta state in November and also ensuring that Rivers United makes an appreciable impact while representing Nigeria in continental competitions starting in August.

‘I am not missing’ – Gov Al-Makura

Beyonce ‘snubbed UK Ivy Park launch out of fear of being outshone by Kate...