NewsDrummer Online Breaking & Trending Newspaper
Home Politics Another building collapses in Lagos killing 1 person and several others injured
Facebook
Twitter
Pinterest
WhatsApp
Tragedy struck again in Lagos yesterday, when a building  at No 9, Alli Close, Mile 12, partially collapsed and killed a 47-year-old woman with several other residents injured.
According to an eyewitness, a part of the balcony in the building had caved in, but the residents of the building refused to vacate the place. 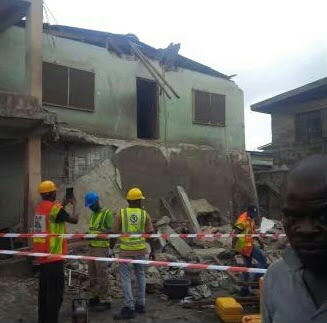 He added that the residents of the 18-room-building had been evacuated and the site sealed off.

The owner of the building has been summoned to the state Secretariat, Alausa Ikeja for questioning.

Nigerian Newspapers: 10 things you need to know this Saturday morning