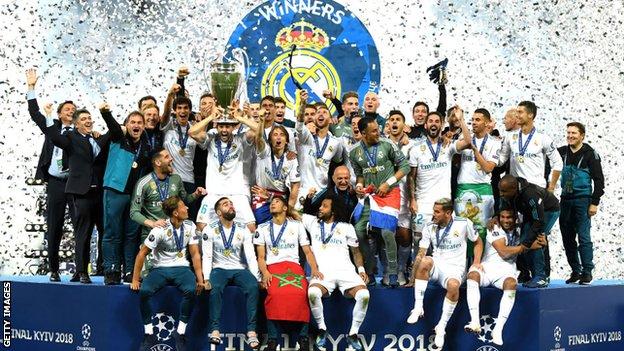 Bale made his mark on another Champions League final with a magnificent overhead kick to put Real 2-1 up after 64 minutes.

Liverpool had already suffered the devastating blow of losing top scorer Mohamed Salah midway through the first half – with a shoulder injury sustained in a challenge with Real Madrid captain Sergio Ramos – when calamity struck for Karius.

Six minutes after half-time, the German inexplicably threw the ball against Karim Benzema, who was not even challenging with urgency, and watched in horror as the ball rolled behind him into the net.

Liverpool recovered from the shock to equalise through Sadio Mane before Bale stepped off the bench to score his wonder goal.

There was to be no comeback from Liverpool this time and Karius’s misery was complete when he fumbled Bale’s hopeful 30-yard shot behind him to seal Real’s win.

It sealed Real’s record 13th win in this competition, and their fourth in five seasons to give coach Zinedine Zidane this third triumph in three years.

For Liverpool manager Jurgen Klopp, it was disappointment again – he lost his third successive final since arriving at Anfield, having suffered defeats in the League Cup and Europa League finals of 2016.

Bale’s Real Madrid future has been under constant scrutiny this season – a quirk at a club that lives by its own rules.

The Welshman did not even make the starting line-up here and only emerged just after the hour – but within two minutes he scored one of the great Champions League goals, an overhead kick that was a triumph of athleticism and technique, and begged the question as to how Real could even contemplate life without him.

As for Bale’s second goal, make no mistake – when he took on that long-range shot, he would have been street-smart enough to know Karius was living on his nerves after his earlier error.

Bale delivered a reminder, if it were needed that he remains a world-class player.

It may just have been an expensive night for suitors such as Manchester United as his display here will have added millions to any potential transfer fee.

When asked about his future after the game, Bale told BT Sport: “I need to be playing week in, week out and that has not happened this season.

“I had an injury five, six weeks in but have been fit ever since. I have to sit down with my agent in the summer and discuss it.”

Real Madrid boss Zinedine Zidane, speaking to BT Sport: “Great emotions. To lift three Champions League trophies with this club, this team is magnificent. We don’t quite realise what we have achieved yet.

“We are going to enjoy the moment. We had a complicated season but to finish with this makes us really happy.

“I have had a little bit of time to think about what this means. This is the status of this club. It is a legendary club, one that has won 13 Champions Leagues and I am happy to be a part of its history too.”

Liverpool manager Jurgen Klopp: “The plan is only to play to win, nothing else, not a lot to say. We started well and played exactly like we wanted to.

“The situation with Sergio Ramos [and Mohamed Salah] looked really bad and it was a shock for the team, we lost the positive momentum and they immediately came up.

“We dropped deep and we could not get to Luka Modric or Toni Kroos. We had to run and work, we did that and half-time came. What can I say about the goals? We scored one, they scored three.”

Jurgen Klopp has lost six of his seven major finals as manager, only winning the DFB-Pokal with Borussia Dortmund in 2012.

Karim Benzema has scored four goals against Liverpool in the Champions League; no player has managed more (also four for Didier Drogba).

Sadio Mane is only the fourth African player to score in a European Cup/Champions League final and the first since Didier Drogba for Chelsea v Bayern Munich in 2012.

Mane became the third Liverpool player to score 20-plus goals in all competitions this season (Salah 44 goals and Firmino 27 goals); the last time that three players hit the 20-goal mark for the club in a single campaign was 1981-82 (Dalglish, McDermott and Rush).