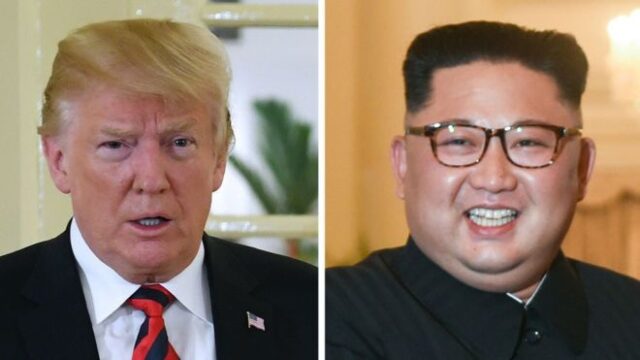 US President Donald Trump and North Korean leader Kim Jong-un will meet for an unprecedented summit on Tuesday aimed at defusing tensions on the Korean peninsula.

No sitting US president has ever met a North Korean leader.

The meeting marks a dramatic shift in relations between the pair, who last year traded insults and threats of war.

Washington hopes the summit will kick-start a process that eventually leads to denuclearisation of the Korean peninsula.

North Korea has said it is willing to commit to denuclearisation, but it is unclear how this will be achieved or what might be requested in return.

The summit will be held at a hotel on Sentosa, a popular tourist island a few hundred metres off the Singapore mainland, at 09:00 local time (02:00 GMT).

Heavy security and armed police are standing guard at summit-related venues across the city state.

The two leaders are staying in separate hotels, not far from each other.

Mr Trump has said he has a “good feeling” about the summit.

Mr Kim spent the evening before the meeting visiting some of Singapore’s tourist sites.

He smiled and waved to excited crowds and was accompanied by Singapore’s foreign minister, who tweeted a selfie standing next to him.

For decades, North Korea has been a pariah state, and now its latest hereditary leader is being treated as a world statesman.

Last year, it would have been a rare sight to see a North Korean flag flying anywhere in Asia.

Now, Mr Kim – who runs a totalitarian regime with extreme censorship and forced-labour camps – is meeting and greeting dignitaries.

“The circus-like atmosphere might be amusing if the stakes weren’t so high,” wrote US campaigning group Human Rights Watch.

What is the agenda?

Few details of the agenda have been released.

According to the White House, this is the plan for the summit:

An expanded meeting with other representatives
Working lunch

Mr Trump will leave the country that same evening to return to the US. Mr Kim is reported to be flying out even earlier, at 14:00 local time.

What are the talks about?

The talks will focus on North Korea’s controversial nuclear programme.

“They have to de-nuke. If they don’t denuclearise, that will not be acceptable,” Mr Trump said ahead of the meeting.

US Secretary of State Mike Pompeo said the US would only accept “complete, verifiable and irreversible denuclearisation” – but would offer “unique” security guarantees, that would provide North Korea with “certainty… that denuclearization is not something that ends badly for them”.

Wickedness:Mum, 29, ‘murdered her baby girl just minutes after giving birth to her’