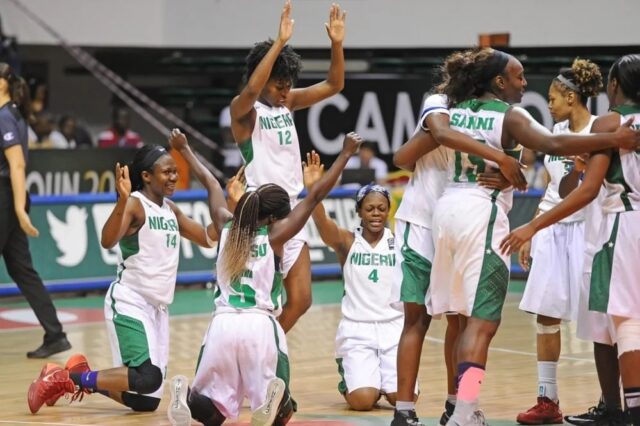 The Nigeria Basketball Federation has called up 28 players to begin camping ahead of the 2018 FIBA Women’s World Cup in Spain in September.

The list which includes 10 players from the 2017 FIBA AFROBASKET winning team in Mali is headlined by WNBA players, Evelyn Akhator of Dallas Wings and Ify Ibekwe of New York Liberty.

The invited players are to report to camp on Wednesday, 18th July, in Atlanta, Georgia for the team’s preparation for the FIBA 2018 Women’s World Cup which starts from 18th July, 2018.

Nicole Enabosi with the University of Delaware basketball team who made the 2018 CAA All-First Team, All-Defensive Team and the Colonial Athletics Association Women’s basketball player of the year has also been invited to camp alongside Hungary based Sarah Imovbioh, Nkem Akaraiwe (First Bank of Lagos) Uju Ugoka and Belgium based Elem Ibiam.

Others on the 28 man list include US based Patience Nene Okpe, Promise Amukamara, Ayoleka Sodade, Elizabeth Balogun, Ijeoma Ajemba and the duo of James Juliet and Adaeze Alaeze who will be hoping to break into the team.

After the first phase of training in Atlanta, the team will return to Nigeria for the final phase of camping before jetting out to Turkey for some grade A friendlies before the first Jump ball at the FIBA 2018 Women World Cup in Tenerife , Spain from 20th – 30th September, 2018.

According to the General Manager of the team Amachree Mactabene, uninvited players who believe they have what it takes to be in the team are also free to report to camp at their own expense to be accessed by the Coaching crew within the first week of training.

WHO send medical supplies to Lebanon

7 things not to do before you go to sleep