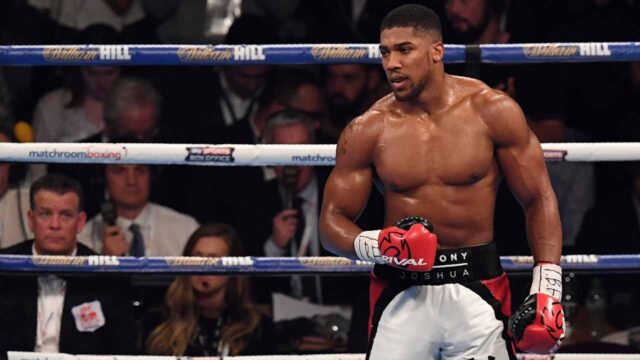 Quite naturally, the boxer is now a beautiful bride in the world of boxing: with his good looks, athletic body and a gentlemanly demeanor on and off the ring. Financial pundits have rated him as the one sportsman to first hit the one billion dollars mark in revenue.

Of course, he knocked out the 39-year-old Russian in an emphatic fashion reminiscent of his brutal takedown of his last 20 opponents. His penultimate opponent Joseph Parker went all the way, but it was far easy for the Watford raised boxer.

The latest victory has brought in a flurry of reports as every boxer in that division wants a piece of the Joshua cake. Victory over Wladimir Klitschko last April sealed his place in the folklore as one of the boxing greats but of course, the likes of Tyson Fury furiously dispute this.

Fury’s- who relinquished his titles during a period of depression after beating Klitschko in 2015- latest rage is that Joshua is avoiding him.

The Gypsy King will first have to negotiate a tricky tie against WBC champion Deontay Wilder, 1 December as the date was confirmed over the weekend. Wilder is unbeaten and wants Joshua badly but previous negotiations stalled over sharing of proceeds.

Joshua’s camp had already booked the 90,000 capacity Wembley Stadium in London 13 April 2019 for a possible showdown with the winner of the Wilder/Fury bout in the US.

Dillian Whyte has also improved since losing to Joshua in 2016 and has gone to also become a contender for a rematch with Joshua. One thing to note is that Joshua keeps showing resilience in his fights.

He was knocked down by Klitschko in their bout in 2017 in round 6 but dusted himself to knock out the Russian in the 11th round. He got a bloodied nose in the second round against Povetkin but also knocked him out on the 7th round, the first time of being left on the canvas. That was Povetkin’s second defeat and first knockout.

However, Joshua, 28, should watch it with the jackals circling around him. But of course, he has a formidable team in Eddy and Barry Hearn to get him good deals and the best options to last as a heavyweight champion – and as undisputed.