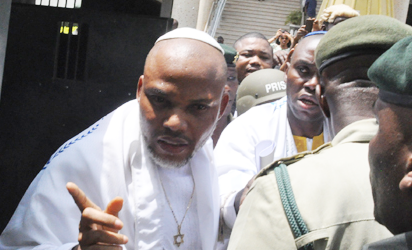 The Indigenous People of Biafra IPOB on Thursday said President Muhammadu Buhari was wooing its leader, Nnamdi Kanu, with a huge bribe to drop the Biafra struggle.

Media and Publicity Secretary of the secessionist group, Emma Powerful, disclosed this in a statement sent to newsmen.

He described as preposterous the allegation by a media aide to Buhari, Garba Shehu, that the renewed agitation for self-determination in the South-East was because the Federal Government had refused to share money with those behind the agitation.

He said, “Federal Government has on several occasions but without success, attempted to buy over our leader Mazi Nnamdi Kanu, making him some irresistible offers.

“We wish to remind the Fulani Presidency that only a certified and unconscionable moron will ever equate money to the motive behind the growing agitation for self-determination across Nigeria.

“If money is what we want, we know what to do to get more money. How many times in the past did our leader reject your financial inducements?

“As a people, Biafrans are enterprising and we don’t think we are behind any region in terms of affluence and economic security despite the oppressive policies of this 97 percent versus five percent government targeted against our hardworking illustrious sons and daughters and the monopolistic tendencies of the Fulani Janjaweed.

The Federal Government a few years ago designated IPOB, which was formed in 2012 by Nnamdi Kanu, as a terrorist organization.

The group is calling for the secession of the Igbo in the South-East and many other ethnic nationalities in the South-South from Nigeria.