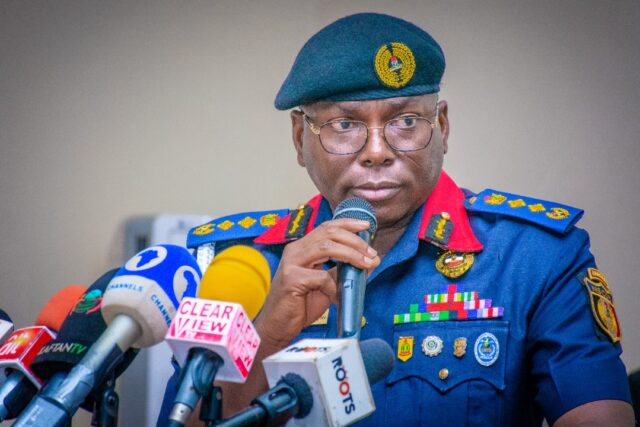 The Marine and land Patrol team of the Nigeria Security and Civil Defence Corps Rivers State Command has arrested 3 suspects with one large wooden boat and 2 Vehicles laden with illegally Refined petroleum products.

He relayed that the suspects loaded the illegally refined petroleum products in cellophane and concealed them in sack bags.

” The products were carefully arranged in the wooden boat such that a layman would assume it as a passenger boat but based on sustained intelligence the suspects: William Chen (29) Male and Emmanuel Uriah (27) Male were tactically double-crossed and arrested by our marine team along Isaka creek off the new Calabar River axis in Rivers State”.

In another development, the land Patrol team arrested one 38-year-old man, for illegal dealings in petroleum products.

The suspect was arrested with a yellow and lemon-coloured mini bus with registration number ABIA BND 82 ZM laden with about 1,500 litres of illegally refined automotive gas oil (AGO) concealed in cellophane.

The State Commandant Ogar added that another Toyota Camry Car with number plate LAGOS GN 76 LND laden with about 1,500 litres of illegally refined automotive gas Oil (AGO) was impounded at Abonmema Wharf by UTC junction in Port Harcourt.

He issued a stern warning to those milking the economy of the nation through oil theft and illegal oil bunkering activities to relocate out of Rivers State as the new Sherrif in town will not compromise nor leave any stone unturned.

“We are fully equipped and ready to fight the menace of oil theft, vandalism of oil pipelines and all acts of illegal dealings in petroleum products in Rivers State. The Command under my watch will not accept Indiscipline, compromise and connivance of officers with illegal oil dealers because any officer caught aiding and abetting illegal bunkerers would be rid of all his uniforms and accoutrements and treated like a criminal”.

The Rivers NSCDC Boss while affirming that the suspects will have their time in Court also beckoned on the public to provide the Command with credible and actionable Intelligence that would enhance the Command to clamp down on all oil thieves in the State.