At one point Japan’s Nikkei 225 index was down 7%, but recovered some of those losses to close 4.7% lower.

London, Frankfurt and Paris all fell sharply when they opened on Tuesday with new losses of up to 3%. In the US overnight the Dow lost 4.6%.

The falls follow some good years for investors. In 2017 the Dow was up 25%, helped by a resurgent economy.

This global sell-off began last week after a solid US jobs report fuelled expectations that the economy’s strength was such the Federal Reserve would need to raise interest rates faster than expected.

Jane Sydenham, investment director at the stockbrokers Rathbones, told the BBC the falls did not appear to herald a serious change of sentiment: “It is always a bit too early to tell, but I think these recent market falls are in the nature of a correction.

“What we have to remember is stock markets have had a very smooth ride upwards and we’ve not had a fall of more than 3% for 15 months. There’s been a real lack of volatility, which is very unusual.”

She added that bear markets tend to happen ahead of a recession and at the moment growth forecasts were being upgraded. 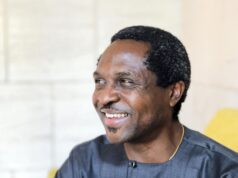 Wike is a shameless liar – Amaechi