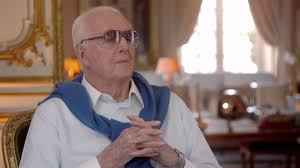 Givenchy set the template for ladylike chic in the 1950s and 1960s, and his restrained style still informs the way Britain’s Queen Elizabeth II and older American and Chinese socialites dress.

His partner, the former haute couture designer Philippe Venet, announced his death through the Givenchy fashion house, saying he had died in his sleep on Saturday.

The pair lived in a Renaissance chateau near Paris.

“It is with huge sadness that we inform you that Hubert Taffin de Givenchy has died,” it said in a statement to AFP.