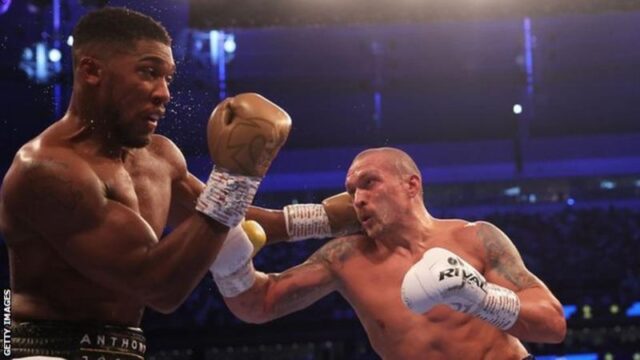 Oleksandr Usyk is the new unified heavyweight world champion after dethroning Anthony Joshua with an incredible performance in London.

The Ukrainian put on a masterclass in front of 65,000 fans inside Tottenham Hotspur Stadium, outclassing Joshua over 12 rounds, and hurting the defending champion on numerous occasions.

It appeared the easier fight for Joshua, but boxing’s triumphant return to stadium nights was soured for the home crowd by a truly exceptional performance from the challenger.

Speaking to BBC Radio 5 Live, Joshua’s promoter Eddie Hearn suggested his fighter may have suffered a broken eye socket and would need to go to the hospital.

“I don’t know if he has broken his eye socket, it doesn’t look great,” he said. “He said he couldn’t see after the ninth round, obviously he was getting tagged a lot as well.”

A devastated Joshua left the ring immediately after the decision but later posted a short message on Twitter, saying: “Keep positive even if the world’s crumbling in front of you! London I love you & thank you each and every time!”

Joshua was relaxed and cheerful as he approached the ring, but concentration was etched on his face from the first bell.

Usyk’s abilities quickly became apparent, the 34-year-old full of feints and pace from the off, moving Joshua around the ring at will as the defending champion settled into a surprisingly passive role.

A few warning shots from Joshua fell short in the early rounds, Usyk either catching them with a glove or spinning away. It would become the pattern of the fight as Usyk made Joshua miss and executed a perfect game plan of his own.

A left cross from Usyk rattled Joshua in the third round and prompted a noisy response from the crowd.

Joshua rode the danger, failing to respond, but making it to the bell safely. Usyk was now brimming with confidence and the London crowd tried in vain to rouse their man into life.

A low shot from Joshua brought a complaint from Usyk and Joshua fired off another, perhaps sensing a weakness in his opponent. Round five was Joshua’s best to that point, but Usyk remained in control and the Briton continued to miss his attempts to land any meaningful shots.

Finally, in the sixth round, Joshua landed his right hand, sparking a response from Usyk, who widened his stance and appeared ready to trade. Joshua backed off, wary of a firefight.

And Joshua’s fears were realized in the seventh as Usyk responded brilliantly to stun him with a left hook to the chin and send him stumbling backward. Joshua stayed on his feet, surviving the round but now in a dire predicament.

Usyk was comfortably ahead on the scorecards and Joshua struggled to close the gap. The huge weight advantage was nowhere in evidence, with Usyk keeping the fight at range and urgings from Joshua’s corner to move forward appearing to fall on deaf ears.

Joshua had Usyk briefly on the ropes in the ninth but returned to his corner with a bloody nose having caught a hard shot to the face in the closing seconds of the round.

There was blood on the faces of both men in the 11th round. Joshua had a cut and swelling on his eye; Usyk had a gash on his left eye. But while Usyk’s mouth was open, he was by far the busier fighter in the penultimate round, outclassing Joshua with ease once again.

The crowd desperately tried to inspire the defending champion, who needed a knockout in the final round. But it was the challenger who almost found the decisive punch, pushing a dazed Joshua onto the ropes.

The bell saved Joshua from suffering another knockout defeat and there was a nervous wait for Usyk’s team for the scorecards.

There were to be no more shocks, however, as all three judges gave it to the challenger and ended Joshua’s short second reign as world champion after just one fight.

Joshua left at a crossroads

It is unclear where Joshua goes from here. There is a rematch clause, one that the two-time world champion is likely to exercise.

He now has two losses to his name and on both occasions, the Briton was dominated by a smaller man. Usyk did not find the knockout punch, but he exposed Joshua’s frailties and somewhat light attacking arsenal.

Joshua had no answer to Usyk and while his opponent glided across the ring, the champion appeared to be dragging his feet through mud. There was no attempt to bully Usyk, wear him down, or go to the body.

It was a strange, almost hapless display from Joshua which leaves his legacy as one of the heavyweight greats in ruins.

Aside from the Briton’s long-term career prospects, Joshua versus Fury now appears to be dead.

Fury fights Deontay Wilder next month in Las Vegas and every fight fan’s greatest fear has been realized after the unification bout collapsed last summer.

To begin with, Joshua will have to win his rematch with Usyk which, after Saturday night’s meeting, appears a near-impossible prospect.

‘AJ gave Usyk too much respect’

Joshua’s promoter Eddie Hearn said his fighter had given Usyk too much respect and would have to make “fundamental changes” to regain his titles.

“Tony Bellew’s comments about overthinking, and it fatiguing you, were right. It is like these last three or four days you get spellbound by Usyk and you end up giving him too much respect and that becomes a problem.”

Hearn said Joshua was already thinking about how to beat Usyk next time.

“He is going to go away and all he will do is think about Oleksandr Usyk. He will be thinking ‘how can I beat him, how can I improve?’ He is obsessed with improving,” said Hearn.

“I just feel there is so much more Anthony Joshua in that fight but he will have to do a lot more in the rematch to be victorious.”