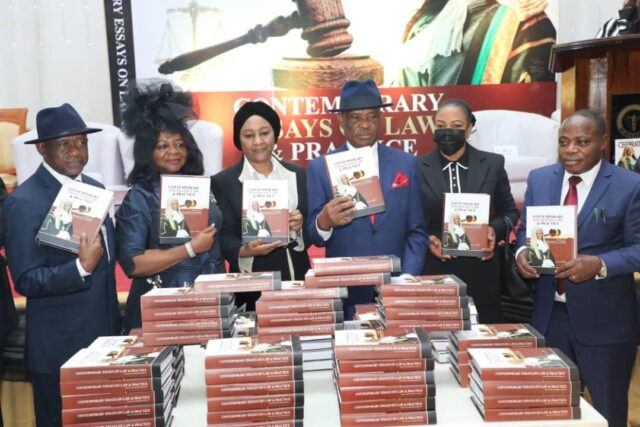 Governor Nyesom Ezenwo Wike says the ongoing dispute between Rivers State and the Federal Government over the legitimate authority to impose and collect Value Added Taxes (VAT) has enormous constitutional implications that should be addressed succinctly.

Governor Wike made the assertion at the book presentation titled: Contemporary Essays on Law & Practice in honour of retired Justice Anwuri Ichegbu Chikere of the Federal High Court on Friday.

The Rivers State Governor said the entire country is waiting for the speedy resolution of the VAT dispute that is now at the Supreme Court.

The governor stated that in reality, the judiciary remains the ultimate guardian of the nation’s Constitution.

According to him, the judiciary is the protector of the rule of law and the guarantor of the constitutional rights and freedoms of the people, which should play out in the VAT dispute.

“While the entire country is waiting for its speedy resolution in the national interest, the Supreme Court of Nigeria remains lethargic in hearing this very important matter thereby unjustifiably aiding the Federal Government to continue to enforce its illegal and oppressive VAT policy on the polity.”

Governor Wike also pointed out that judicial independence is truncated when judges are subjected to summary trials and preconceived indictments by an all-powerful quasi-judicial agency on the promptings of persons or parties with a vested interest in the outcome of the litigation processes.

He noted with dismay that the National Judicial Council (NJC) is becoming a willing tool to intimidate judges who are simply discharging their constitutional duties.

By doing so, he said, the National Judicial Council (NJC) may be joining the league of unholy forces now assailing the independence and reputation of judicial officers across the country.

“My candid opinion is that the National Judicial Council must thread with utmost caution in matters of judicial complaints and discipline lest it wittingly or unwittingly turns itself into another bully to be feared rather than being respected in its roles as both the headmaster and guardian angel of the nation’s judiciary.”

Governor Wike emphasized that the judiciary is the exclusive authority through which all persons, authorities, and agencies are subjected to the precepts and dictates of the Constitution and ordinary laws of the nation, even if it is exclusively enacted by the legislature.

The governor said no nation can be seen and reckoned with to be free, fair, and just without a strong, independent, and functional judiciary.

He also observed that no democracy can survive, flourish and deliver social and economic progress without a courageous, efficient, and effective judiciary.

Governor Wike has therefore urged judicial officers to relive the time when the nation’s judiciary was truly independent, manned by men and women of courage who were publicly trusted to deliver justice fairly and equally to everyone.

“There was also a time when our judges have respected the world over for their independence, courage, and credibility.

“Again, time was that decisions from Nigerian courts were widely accepted and celebrated across the world as timeless models of judicial precedents.

“But today, what is your candid assessment of the character and integrity of our country’s judiciary, which is becoming more confusing and painfully contradictory.”

Speaking further, Governor Wike pointed to the concern that ranges from case backlogs, poor case management, and rampant delays in the administration of justice that have seriously eroded public confidence in the judiciary and its capacity to deliver justice to ordinary citizens.

“There are also serious concerns about the apparent lack of courage among several judges and the declining quality of judgments from our courts at all levels.

“Having succumbed to fear, intimidation and blackmail most of our judges are being compelled to tailor their judgments toward the wishes and desires of powerful political interests.”

Governor Wike, however, commended the few judicial officers who are keeping hope alive with their extraordinary courage.

He said their exemplary fidelity to the rule of law and strong determination to ensure that justice is not only done but seen to have been done in matters that come before them depict that all hope is not lost.

Governor Wike also noted that Justice Chikere exhibited excellent judicial temperaments of being calm always, courteous and compassionate towards everyone, including her colleagues, lawyers, and litigants in or outside the office.

Speaking at that event, Chief Judge of the Federal High Court, Hon. Justice John Terhemba Tsoho, represented by Justice Binta Nyanko noted that Justice Chikere served the judiciary meritoriously from the bench for 19 years with her health and integrity intact.

Justice Tsoho said keeping pace with a long judicial career in Nigeria is no mean task and Justice Chikere weathered the adversities and challenges successfully.

“As we gather to celebrate this outstanding judicial officer for her years of impressive service to the nation, the occasion evidently climaxes the fame attribute that excellence and selfless service are virtues worthy of emulation.

“Hon. Justice Chikere is notably calm and collected and is much like a mother to many colleagues.  As a Christian, he is fervently adherent to the tenets of Christ, especially, his love for humanity.  He has been remarkably humble, peaceful, friendly, humane, honest, generous, incorruptible, and hardworking.”

On his part, the Attorney General and Commissioner for Justice of Rivers State, Prof. Zacchaeus Adangor, SAN, said the highly rewarding and fulfilling career of the celebrant started on 17th January 1986 when she was employed into the Rivers State Civil Service as State Counsel 11.

He said, with dint of hard work, Justice Chikere enjoyed impressive career progression to become Acting Director of civil litigation on the 14th July 1998 before taking up the duties of a bencher at the Federal High Court.

“My Noble Lord distinguished himself on the bench by his brilliant rulings and judgments, firm control of his proceedings, and fairness to legal practitioners and litigants who appeared before him. My Noble lord is known to be a fearless and courageous judge who dispensed justice without fear or favour, affection or ill-will.”

President of Nigeria Bar Association (NBA) Olumide  Apata represented by the Port Harcourt Branch Chairman of NBA, Prince Nyekwere described Justice Chikere as a quintessential and consummate judge who without indulging in frivolities, discharged duties fairly and retired without a blemish on her service records.

Speaking on behalf of Senior Advocates of Nigeria (SAN) former President of Nigeria Bar Association, O. C. J. Okocha acknowledged that Justice Chikere was reputed to be diligent, hardworking, and fearless in her dedication to judicial functions with an untainted record.

In her response, Justice Chikere said her sojourn at the federal judiciary made her a better person.

She expressed gratitude to Dr. Peter Odili, who was accompanied by his wife, Justice Mary Odili of the Supreme Court, for allowing her to be transferred from the State Judicial Civil Service to the Federal Judicial Service and to her husband for the much encouragement he gave that helped her to become a successful judicial officer at the bench.

Selena Gomez now the most followed on IG