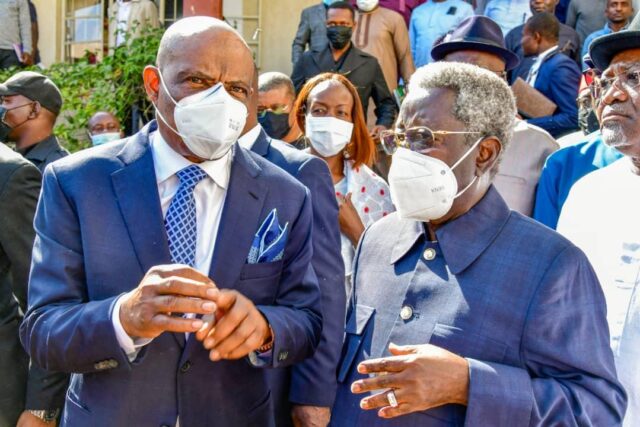 Rivers State Governor, Nyesom Ezenwo Wike has reiterated the need why the leadership of the country or any other State of the federation cannot be entrusted anymore to the All Progressives Congress (APC) led Federal Government.

This is because, he said, APC has performed woefully on all fronts.

Governor Wike made the assertion while fielding questions from journalists within the court premises in Jos Town where Jonah Jang, the former governor of Plateau State was arraigned on Wednesday.

The Economic and Financial Crimes Commission (EFCC), had taken Jang alongside Yusuf Pam, an ex-cashier in the office of the Secretary to the Government of Plateau State to court on alleged fraud.

He told journalists when the court session went on break that it is obvious to every Nigerian to see how the federal government under the APC has failed to bring to an end the needless killings in parts of the country.

According to him, the APC-led Federal Government has also not addressed the hardship it has brought upon Nigerians.

“Look at what is happening in Plateau State. Look at how innocent people are being killed daily and it also applies in other states. Christians are dying here, Muslims are dying there.

“Plateau State is ripe for Peoples Democratic Party (PDP) to take over because APC has performed woefully as far as Nigeria and this state is concerned. I stand to be challenged by anybody.”

Governor Wike said he has not told anybody that he wants to run for election but what is not in doubt is that there has to be a united PDP that is focused before anyone can talk about winning an election.

“Therefore, every individual has to keep his own aspiration and focus on how the party will be united to salvage the country and to salvage Plateau State too from APC.”

Speaking further, Governor Wike gave reasons as to why he was in Plateau State and said it was to see how unity can be engendered in the Plateau State  PDP.

Particularly, Governor Wike said, his visit to Plateau State was to seek reconciliation between Jeremiah Useni and Jonah Jang.

He said since his visit coincided with the court case against Jang was heard, he felt it was appropriate to attend in solidarity.

“I think for me, this is one of those things you face after you’ve served your fatherland. As a mark of solidarity, I’m here to give him courage, to reassure him that we are behind him. We will do all we can within the ambit of the law to give him the support.”

Missing Mother of Three Assumed Dead After Date With Man She Met Online in...

Is this the change you promised us? Regina Askia asks in an open letter...