Here we look at the five most influential Governors in Nigeria.

Rivers State Governor Ezenwo Nyesom Wike is today regarded as the most influential Governor in Nigeria, based on the many battles he fought and won during the pre and post 2015 general elections. He contributed immensely in overthrowing the APC Government in Rivers State with different political tactics.

His victory at the Supreme Court sums up his legacy as truly the people’s choice in Rivers. The recently concluded re-run elections in the State has demonstrated the Governor’s popularity among Rivers people.

The Ikwerre born politician is a member of the Peoples Democratic Party PDP and a former Minister for State for Education under the administration of Goodluck Jonathan.

Besides the State being the treasure base of the nation with huge oil and gas reserves is expected to play a very big part in 2019 General Elections.

The State Governor will host the PDP Convention in May in Port Harcourt. This is an indication of the increasing influence of Nyesom Wike to national politics.

Lagos has a rich history of economic growth and transformation. Although it covers only 0.4th of Nigeria’s territorial land mass, making it the smallest state in the country, it accounts for over 60% of industrial and commercial activities in the nation.

Lagos is financially viable, generating over 75% of its revenues independent of federal grants derived from oil revenues. It generates the highest internal revenue of all states in Nigeria.  If taken as a country on its own, its 2010 GDP of $80 billion made it the 11th largest economy in Africa.

Lagos State can be described as the commercial nerve centre of Nigeria judging by its huge population of over 10 million people.

Lagos State also is a stronghold of the All Progressives Congress APC. The party has massive follower-ship in Lagos State thereby making Akinwumni Ambode a very powerful Governor in Nigeria. 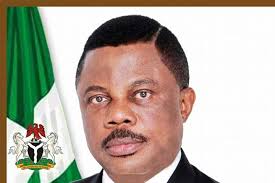 Willie Obiano succeeded his political mentor Peter Obi as the Governor of the State in 2014 with a mandate to improve on the existing infrastructure in the State. Willie Obiano immediately won the hearts of the people of Anambra by engaging in people oriented programs and projects.

The Governor has received many accolades under two years of his administration. Anambra being the eighth most populated state in Nigeria with population of over 8 million has the lowest poverty rate in Nigeria, showing its economic viability.

The State is the economic centre of the South East and also a political force of the Igbo nation. As the National Leader of the well accepted All Progressive Grand Alliance APGA in the five South East States, Governor Willie Obiano is currently adjourned as one of the most powerful politicians in Nigeria. The outspoken Governor of Ekiti State is a well known political figure in Nigeria. His hard stance criticism of the Muhammadu Buhari administration and his introduction of the ”stomach infrastructure” into Nigeria political sphere has popularize the Ekiti State born politician. Fayose is grass rooted in Ekiti politics, his resounding victories at the 2015 general elections and also surviving his impeachment battles shows how smart a politician he is.

Do you agree with us? Please you can comment on the topic or send us an email at info@newsdrummer.com or newsdrummeronline@gmail.com.